I have said for years (quietly and mostly to myself) that hate and love are on a continuum, so hate is actually just loving something a very tiny little bitty bit. And this post by Regie shows that love can grow.

Posted by beautifuldaymama on November 14, 2016 in Uncategorized

This really gave me food for thought.

Here’s my annual Veteran’s day post in memory of my father, “our” veteran. For a moving description of what it means to be a veteran, please also see J. Mark Jackson’s essay for the Washington Post.

Heroes may not be braver than anyone else. They’re just braver 5 minutes longer.
― Ronald Reagan

When I was little, I found out about heroes. They are the ones who fight the biggest dragons, win the prettiest princesses, and save the best kingdoms in the end. This didn’t surprise me in the least, because I knew someone who was a hero – my father. My mother told me.

As I got older, this belief was shaken a bit. It didn’t seem like it was a hero’s work to fix toilets, keep old cars running, and take your (ten!) kids out…

Posted by beautifuldaymama on November 12, 2016 in Uncategorized

Our first official family pet was a 3 1/2 yo black lop eared rabbit. We got him through friends of friends who’s daughters weren’t paying him enough attention any more. We were told his age, he is a boy, and his name is Pepper. After just a couple weeks, I started calling him Mr. Buns because Pepper is gender neutral and I felt I couldn’t really associate a full persona without identifying him with a gender. The moniker Mr. Buns stuck and lasted for the remaining five years of his life.

So when I read this post by WhiteGirlsBeLike, I could relate on many levels. And then it occurred to me – What If Mr.Buns Was Never A Boy Rabbit?! What if he was a girl. IDK, we never took him to the vet ever. At the time, I felt confident in the information that was passed along to us, but I never even met the people that owned him. I don’t know if they had ever taken him to the vet either. I guess I’ll never know.

Not that it matters. He will always be Mr. Buns. RIP Mr. Buns

(Well, not really.  I mean, kind of.  Like you think you know someone for a whole year and then they turn out to be a completely different person so you sorta feel like the person you knew is dead.  That’s where I’m at right now.)

Alessandro and I finally took Diane Kitten to the vet after almost a year of having her (not out of neglect, we’re poor) but because she randomly started coughing and it was clear she was having trouble breathing.  We rushed her to the kitty Emergency Room and found out she has asthma so it’s all good and she has medicine and feels much better now.

We found out some things like she’s about 2 years old and has a little tracker in the back of her neck (which I totally wanna remove, especially considering we looked for her owners for a longggg time and nobody…

Posted by beautifuldaymama on November 5, 2016 in Humor

What The Heck Does “Manly” Mean?

When Brother was young I gave him a plush baby doll to play with. He named it iBaby and took it to kindergarten on the day everybody brought a stuffie toy for show and tell. But even so, it was never one of his favorite toys and didn’t get that much play time at home. We resisted giving our kids toy weapons for years. When we finally did let a couple toy guns and swords into the house they immediately became favorites. That was okay because they would go outside and run around and act out fabulous adventures while breathing fresh air and getting exercise.

I like this blog post by Moderate Mama because it shares and instinct for balance, practicality, and tolerance. That is Good Parenting.

Standing in the express line at our local Kroger store, I found myself behind an elderly gentleman holding a large, vibrant arrangement of flowers. The line was long so I decided to interrupt his internal conversation and impose upon him my curiosity.

Turning only his head and left shoulder, he quickly stated…

Naturally… I kept right on talking.

5.68 seconds past and the gentleman turned around on his own accord in order to inform me that… 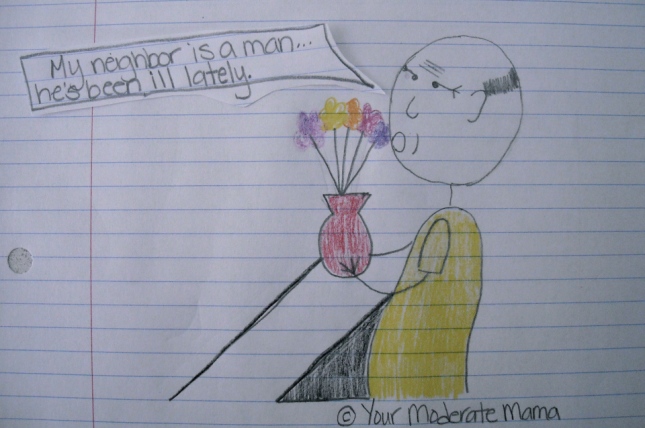 To which I replied…

Uncomfortable with my presumed, unspoken assumptions about this gift of man-flowers, he explained…

To which I replied…

Even though my thoughts had been verbalized in the form of praise, he was still insecure that his manhood had been compromised.

All I could do was smile my smile and giggle a wee bit.

Why can’t a man be comfortable giving another man flowers?

Men obviously enjoy beautiful things, I mean they enjoy us…

Posted by beautifuldaymama on November 4, 2016 in Parenting

On the Necessity of Parents’ Doing their Children’s Homework.

I was jaw-drop shocked when I went to school with my fourth grader and his mission project and saw all the mission models that had been made by these students PARENTS. WTF? No adult in their right mind would think these little 9 and 10 year old had built these mission models. So why are they getting extra credit for it?

I stupidly let my son make his model all on his own out of corrugated cardboard. And he did a brilliant job, imitating his specific mission and building a sheep pen with sheep in it, an element again specific to his mission. But he was so embarrassed when he saw the store-bought kit models that other kids brought to school that he left his own creation in a plastic bag in the corner of the classroom and wouldn’t even display it. (sad mommy tears)

As I said in the previous post, rebellion is in the air. A rebellion against the oppression of homework and the tyrannous teachers who spoil the quality of students’ life assigning it. However, while analyzing these vigorous movements, I have realized that here in Italy, as usual, there is an anomaly. In fact, they do not seem to be grown out of the necessity of those “ill-treated” students, as it would be normal to assume, but rather, their parents’. It seems a kind of weird, I know, but it actually explains the nature of the phenomenon and why this generation of parents feels haunted and frustrated about homework habit: THEY do their children’s homework, that is all . 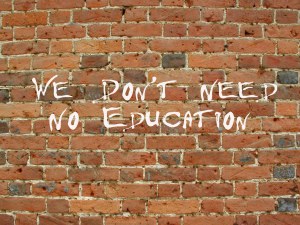 Of course, I cannot but unconditionally sympathize with them, as that was the “duty comes before pleasure and leisure” generation, my generation. Our parents would  have never dreamed of questioning the necessity…

Posted by beautifuldaymama on November 4, 2016 in Parenting

Statisticians Horrified to Discover that a Vote for Anyone but Trump Really Is a Vote for Hillary. | Not Exactly Subtle

via Statisticians Horrified to Discover that a Vote for Anyone but Trump Really Is a Vote for Hillary. | Not Exactly Subtle

Posted by beautifuldaymama on October 23, 2016 in Humor

Sometimes having a heart to heart is really tough. However, with some honest dialogue there is room for growth. That being said… Pull up a chair and lets have a little chat. I would like to talk about something in your pants that every so often involves a man in your life.

You see the problem almost always starts out like this:

Supermom: Hey honey! Are you stopping by the store on the way home?

Me: Yeah I was going to pickup a case of Old Spice, some wood screws, and some beer.

Supermom: Great! I am trying to not stab the dog and cry randomly in front of the kids so I need you to get something for me while you are there.

Me: No problem sweetums. What do you need? (I think I know at this point)

Supermom: I’m feeling a little crampy and I think I am…

Posted by beautifuldaymama on October 25, 2014 in Humor 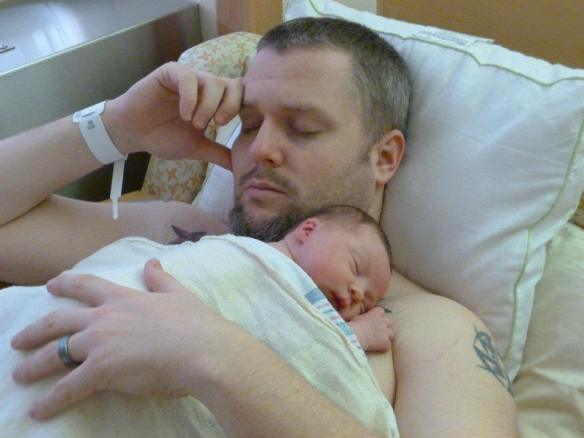 Since becoming a father, I, like many people, have spoken up about dads playing more of an involved role in the upbringing of their children, as well as how the increased involvement is not only being downplayed but even ridiculed by still so many. And being the kind of person who loves to whip out my soapbox from time to time, I never have a problem when it comes to defending fellow dads.

2014 has been unofficially deemed the year of the dad. We’ve seen some pretty big strides taken to help break down the stereotypes of the idiot dad, but it still feels like we have a long way to go. For every hip and cool commercial, like #HowtoDad from Cheerios and the call to celebrate dads with Real Dad Moments by Dove Body Care, we still encounter examples of dads being marginalized on a daily basis. Some men…

Posted by beautifuldaymama on October 15, 2014 in Parenting

Want a space house? It’s hard to make a down payment in zero gravity

Since establishing mankind’s studio apartment in outer space known as the International Space Station, and spaceflight becoming more available to the general public, let’s face it; the Re/Max hot air balloon will be replaced by a space shuttle before we know it.

As exciting as the prospect of living in space is, we should temper our enthusiasm with a level of caution. Just like buying a fixer-upper in the Ozark Mountains through someone on the Internet, purchasing a residence 230 miles above the earth can be risky.

During a real estate symposium held last week in Washington D.C., agents stressed that there are a lot of things to consider when looking for a little spot in the solar…

Posted by beautifuldaymama on October 13, 2014 in Humor

Punctuation Marks We All Desperately Need…..

I came across these on the Internet and had to share them with you – credit goes to Mike Trapp.

Basically, it proposes some punctuation marks that, in this digital world where much of the inflection of speech is lost, we desperately need. I think all of them are justified!!

Take a look… can you think of any others that would be useful? 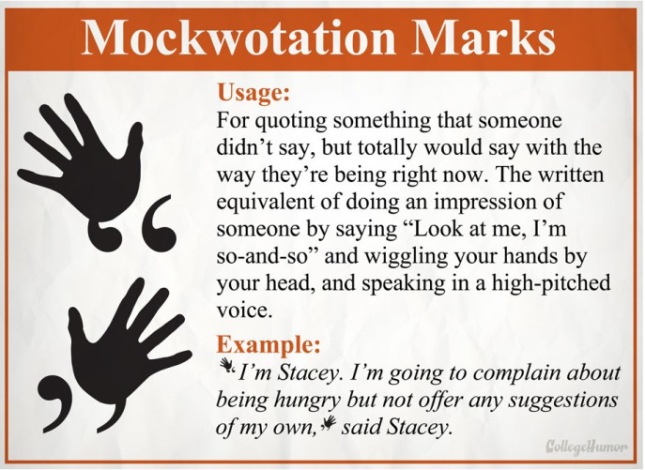 Posted by beautifuldaymama on October 6, 2014 in Humor